Keeping up with you 13 May

Brexit
Scotland is gearing up for the Euro elections on 23 May. Don’t be tempted to fall for David  Lidington CBE, de facto deputy PM to Theresa May, who welcomed the European elections like the promise of a complete disaster for the Tories.

It will be if polls prove even vaguely accurate. Everything suggests that Nigel Farage’s Brexit party will sweep the boards. Still more of a kick in the teeth for the Tories following hard on the local election decimation they suffered last week.

The slough of despond gets more and more miserable.

If Mrs May's Government didn’t show quite as much contempt for Scotland and for our interests, I might even begin to feel slightly sorry for Theresa May. But she has only herself to blame.

So do make sure you get out on the 23 May and project your voice. The SNP’s number one candidate is Alyn Smith who has been a highly effective MEP for the last 16 years and is really committed both to Europe and to Scotland. See more here: https://www.alynsmith.eu/

We have five more SNP candidates, all of whom are highly worthy of a vote so all you need to do is put an X for SNP.

The SNP’s six candidates – three men and three women – are led by Alyn Smith, who has been an MEP since 2004. Christian Allard, who was born in France, is second on the list of candidates, followed by the party’s former environment minister Aileen McLeod, ex-Rutherglen and Hamilton West MP Margaret Ferrier, Scottish Borders councillor Heather Anderson, and SNP national executive committee member Alex Kerr. 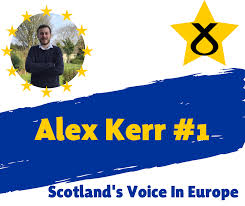 I must give a special mention to Alex Kerr, who currently works for me and very successfully too. It’ll be a marvellous challenge for him and I wish him every good fortune.

We need to send a clear message of rejection to the Westminster Tory government of its damaging plans to drag Scotland out of the EU, and inflict harm upon Scotland’s public services, economy and people’s living standards. 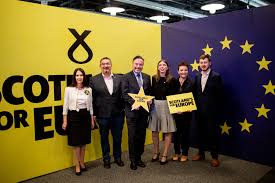 As our First Minister, Nicola Sturgeon MSP, explained at the launch of the SNP’s European campaign: “Westminster is paralysed by Brexit with its two main parties broken by infighting and indecision.

“These European elections are Scotland’s chance to make our voice heard.

“The Tory government has ignored the people of Scotland, and treated our parliament and our government with contempt.

“But they can’t ignore us forever, we must continue to fight to stop Brexit and the damage it will inflict on everyone, in every walk of life.

“Scotland’s future belongs in Europe - let’s make it loud and clear on May 23rd.”

Candidate Christian Allard, French-born and working within the fishing sector here for many years, brings an interesting perspective: “For three years Theresa May has tried to make Brexit about one thing – ending freedom of movement.

“EU nationals have been used as a bargaining chip and have faced fees to apply to stay in their home.

“Well, EU nationals should use this election to send Theresa May a message.

“Try running our NHS without nurses and doctors from the EU.

“Try running our world-class universities without researchers and staff from Europe.

“Try running our fruit farms or our fish processors without us.

“Freedom of movement is essential to Scotland’s public services and our future prosperity.

“Scotland’s future lies in Europe. A vote for the SNP is a vote to make clear Scotland says No to Brexit.” 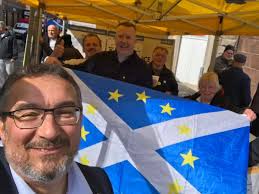 Last weekend, on Saturday, SNP activists were out distributing half a million STOP BREXIT flyers as part of three ‘Super Saturdays’ the party is holding in the run up to the elections.

The move comes as a new poll this week found voters see the SNP as the most anti-Brexit party in the UK – the survey by YouGov found that 65% of respondents said they thought the SNP was against Brexit, the highest figure for any political party in the UK.

Speaking ahead of the first Super Saturday, Depute Leader of the SNP Keith Brown said: “The SNP will be out in force today across the county making the case that Scotland’s future lies in Europe – a vote for the SNP is a vote to stop Brexit.

“Never before have European elections been so important. We need strong SNP voices in Europe to send a clear message that we will not accept a Brexit process which fails to represent Scotland’s interests.

“A vote for the SNP is a vote to make clear that Scotland says no to Brexit.” 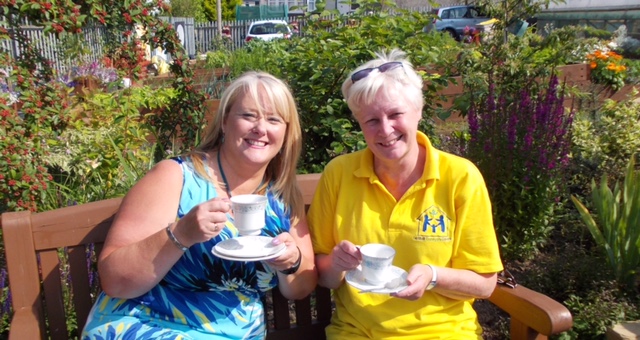 It’s great to see that participants like the fantastic Larkhall Growers are now developing what they’ve been doing. The Growers have been working on the Plan and encouraging people to take part in the survey so as to make their views known.

"It was a huge success, as it always is," says Youth Convenor, David Vickers. "In what is always a great day, our youth festival welcomed hundreds of youth players to Laigh Bent at all MINI and MIDI age groups. A perfect end of season bonanza of sport!"

"Both MINI and MIDI teams participated. Our annual P1-3 All Blacks vs British Lions match played their match at noon with all the enthusiasm and vigour they always show." 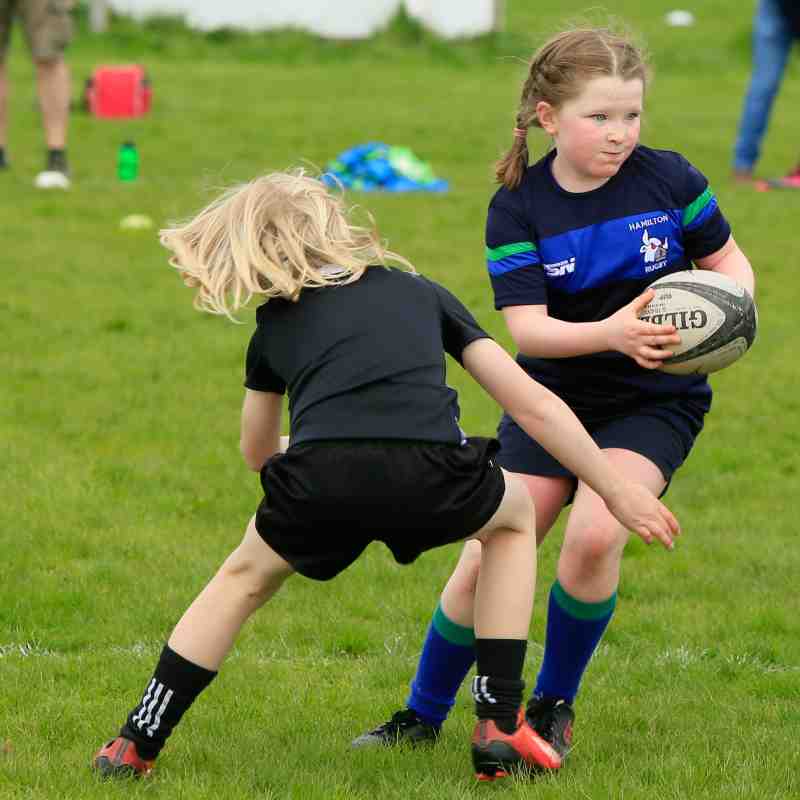 There were children and young people, plus their families of course, around about 600 of them in all from all over Lanarkshire, plus Dumfries who ran off with most of the trophies!

David adds: "We've take on a new full-time employee, Steven Meenagh, who's been managing festivals elsewhere for a long time so this was his first Hamilton Youth Rugby Festival. Plus we had the new Regional Manager for Scottish Rugby, Ailidh Hood.

"But of course, far more important than all of those people, even the Glasgow Hawks, is our own Christina McKelvie! She has been great and really loyal in her support for us. We really do appreciate it."

Hamilton Jobs Fair
I’ll be co-hosting the Jobs Fair in the Hamilton Town House on Friday 5 July between 11am and 2pm. 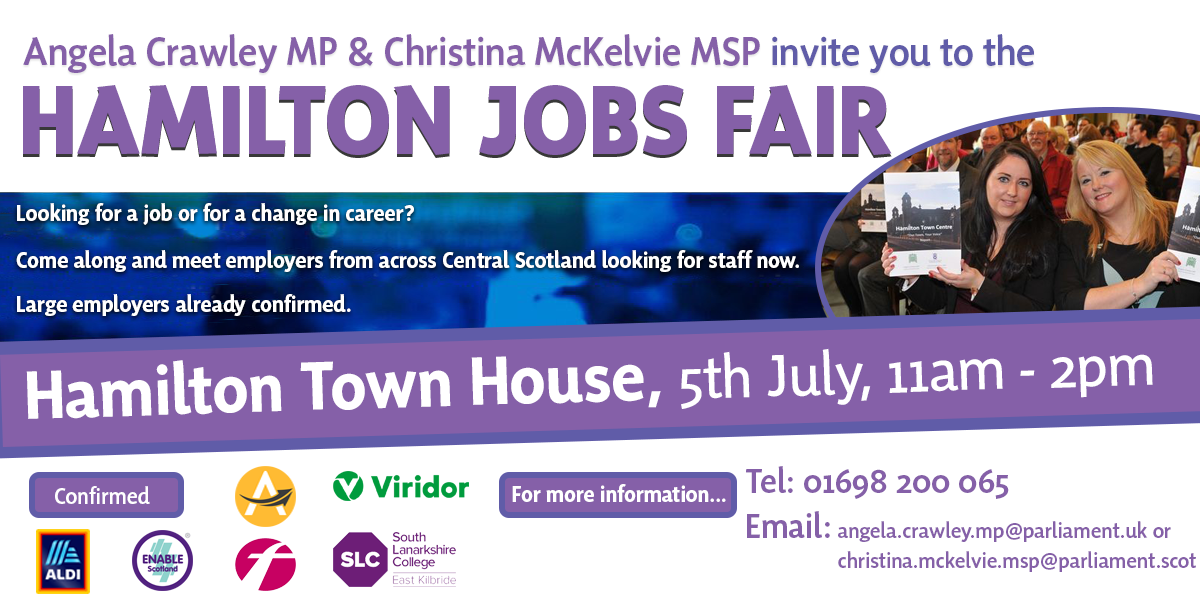 Myself and Angela Crawley MP have brought aboard an impressive group of big employers who are looking for staff. So far, we have confirmed include Social Security Scotland, ALDI and Aspirare.

I’d like to encourage other businesses to join us. There’s no cost to take a stall so contact me by email on This email address is being protected from spambots. You need JavaScript enabled to view it. or phone the office if you prefer 01698 403 310.

It is a tremendously important that people are encouraged to reach their full potential and if we can help you to do that by meeting with the right employer, then that’s a big plus.

So whether it’s an apprenticeship, a new career direction or a way to develop your skills and training, please do join us at the Hamilton Town House.


Climate change
Many of us have come suddenly to recognise the real threat of Climate Change. Extinction Rebellion may have irritated and annoyed Londoners, but it has been hugely successful in pushing the climate crisis up the political agenda. 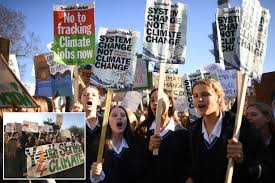 Even at a personal level, individuals and families are suddenly doing more environmentally friendly things such as using low-energy lights, recycling everything possible, reducing waste in a range of smaller ways. Yes, we need big action at Government level but we all have a personal responsibility as well.

In fact, Scotland will have the most stringent statutory targets in the world. The proposed targets were already world-leading – now Scotland is redefining what world-leadership means.

Scotland will go greener faster under new, tougher climate change proposals that set a target for net-zero greenhouse gas emissions for 2045 which will see Scotland become carbon neutral by 2040.

We have already halved greenhouse gas emissions from Scotland while growing the economy, so we know we can do it. We are committed to meeting the most ambitious targets possible and doing so while continuing to build an inclusive and fair economy.

At present, although children under 12 cannot be prosecuted in Court, they can be referred to the children’s hearings system on the basis they have committed an offence.

Under current legislation, this means they can gain a criminal record.  This can often compromise childhoods and also limit opportunities and life chances in adulthood, particularly around employment.

The Age of Criminal Responsibility Bill raises the age from eight to 12, meaning that Scotland will lead the way in the UK in terms of ending the treatment of children under 12 as criminals.
The Bill will make far-reaching changes to the way that the law treats children under 12 with Scotland leading by increasing the age of criminal responsibility to the highest in the UK.

Evidence shows that early involvement in formal criminal justice systems can be severely detrimental to children and their future behaviour.
Children’s Minister Maree Todd said on Tuesday: “Today is an historic day. This ground-breaking law delivers a bold, progressive, child-centred approach that will make a real difference to children’s lives.

“We can be proud that Scotland is leading the way in the UK. This new law means that no child under 12 will ever again be arrested or charged with an offence in Scotland. But the Bill also ensures that serious harmful behaviour will be investigated appropriately and victims will continue to get the support they need.

“Currently young children can be left with criminal records that can follow them into adulthood and affect their chances of getting training or a job. The measures in the Age of Criminal Responsibility Bill will end that.”

Ballantyne shows her true colours
Embattled Tory welfare spokesperson Michelle Ballantyne has come under renewed pressure after “callous” comments about changes to pension credit rules that could leave low-income Scots up to £7000 a year worse off. 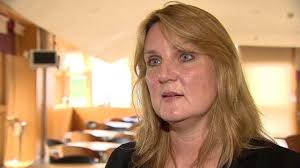 Asked whether she would support a cross-party letter to the UK Government calling for a delay to pension credit changes, the Tory front-bencher replied: “Do I care one way or the other? I probably do not, actually, if I am honest”.

The Tory government recently announced changes to force mixed-age couples to apply for Universal Credit instead – meaning a cut in income of up to £7000 a year.

Ms Ballantyne has previously faced criticism for calling for the Scottish Government to have “nothing to do” with the NHS, saying that “people on benefits cannot have as many children as they like” and claiming that “there’s no such thing as a bedroom tax."