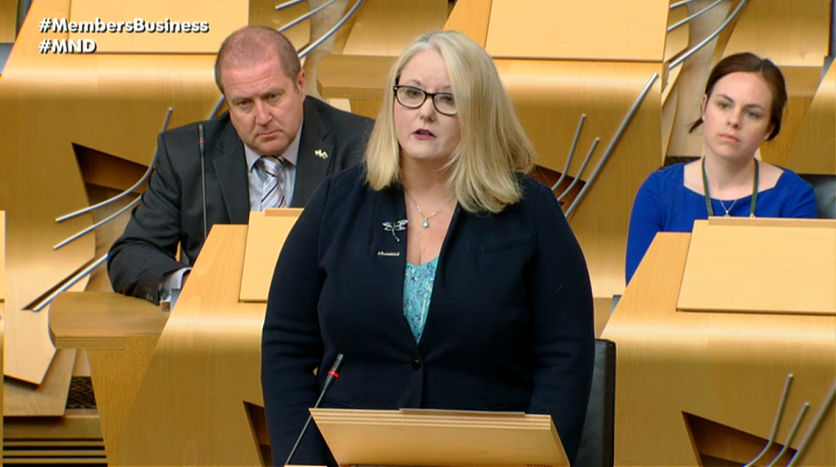 MSPs have marked Global MND Awareness Day 2017 with a members’ debate at Holyrood.

Hamilton, Larkhall and Stonehouse MSP Christina McKelvie – who lodged the motion for debate, gaining cross-party support – drew on her own experience of losing her father to MND at a young age and set out her determination to raise awareness, improve care and increase research funding in pursuit of finding a cure.

Christina McKelvie praised the work of MND Scotland and the Euan MacDonald Centre, as well as the campaign legacy of the late Gordon Aikman who spent his final months raising awareness of the disease and fundraising over £600,000 for MND research.

The MSP also paid tribute to the courage of ex-Scotland rugby star Doddie Weir who revealed ahead of MND Awareness Day that he has been diagnosed with the disease – and has pledged to devote his time to helping fellow sufferers and supporting research.

“Motor Neurone Disease is indiscriminate – it’s an unrelenting, terminal, cruel disease. But today’s Global Awareness Day is an opportunity for us all to stand united in raising its profile and determined to find a cure.

“The first step is getting more people talking about MND – helping to raise awareness and to raise money for research.

“The SNP in Government has listened to calls to do more, that’s why there’s more money going into finding a cure for the disease, we’re doubling the number of MND nurses in Scotland and we’re giving MND patients a stronger voice.

“But let’s be clear – those living with MND don’t have long. It’s currently a race against time, with only a sad outcome. The average life expectancy following diagnosis is only 14 months.

“We all have a responsibility to make the reality better for all who still have to bear that MND journey – and for their families, their carers and their loved ones.”