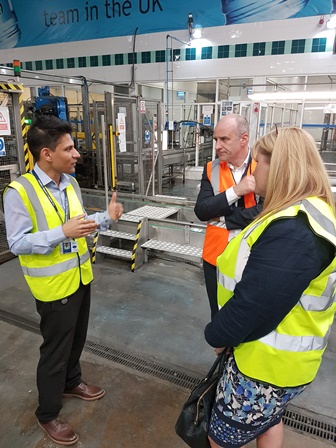 Eden Kafevend, the UK's leading workplace & office drinks vending machine supplier, was visited by Christina McKelvie MSP this past Thursday [18 August] at their headquarters in Blantyre.

The Hamilton, Larkhall and Stonehouse MSP visited the firm to discuss their ambitions to bring more jobs into the local economy. Based from the Hamilton International Technology Park, Eden Kafevend was recently acquired in a $525 million deal by Cott Corporation. It is hoped this will allow Eden Kafevend to become a leading global water and coffee services platform.

Commenting on the visit, Christina said:

“Several times throughout my terms as MSP for Hamilton, Larkhall and Stonehouse I have been the guest of Eden Kafevend. It has been hugely encouraging to see the growth of the company, who prides itself from being based right here in my constituency.

“Eden has seen a rapid growth in expansion since my last visit. Not only have they been purchased in a multi-million dollar acquisition, they have modernised their recruitment processes by taking on a range of Modern Apprentices.

“By employing the vast majority of staff from the surrounding area, Eden reinvests its profits back into the local economy, boosting jobs, skills and investment.

“Eden also assured me that, in light of the European Referendum result, they took stringent steps to reassure European nationals within their workforce that their jobs were safe.